Performance – Samba do Trabalhador by the Samba Society 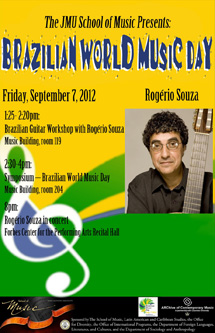 JMU School of Music – A Day of Brazilian Music and Scholarship

September 7th. All day. with a workshop, symposium and concert at James Madison University, Harrisonburg, Virginia.

Here's the program information: September 7, 2012 1:25- 2:20pm: Brazilian Guitar Workshop with Rogério Souza
Music Building, room 119 2:30-4pm: Symposium - Brazilian World Music Day
Music Building, room 204 8pm: Rogério Souza in concert
Forbes Center for the Performing Arts Recital Hall This event is supported with funding from the School of Music, Latin American and Caribbean Studies, the Office for Diversity, the Office of International Programs, the Department of Foreign Languages, Literatures, and Cultures, and the Department of Sociology and Anthropology Brazilian World Music Day is sponsored in partnership with the ARChive of Contemporary Culture at Columbia University, NY

September 7th. 6:00 to 7:00 PM EST. WUMD 89.3 FM and online at www.893wumd.org. Have a listen to Dário Borim who will be doing a special edition of his radio/Internet show, Brazilliance, live from the campus of the University of Massachusetts Dartmouth. The special, called A Brazilian Quilt of Rhythms, will feature only instrumental renditions of a variety of Brazilian music styles, from chorinho, to samba, to bossa nova, to forro', etc. Dário is an Associate Professor and Chair in the Department of Portuguese at U-Mass Dartmouth.

Lecture – The Meanings of Music in Brazilian Culture

September 7th. 12.30pm. The British Library, 96 Euston Road, London, England. +44 (0) 20 7412 7427 In celebration of Brazil Music Day and Brazilian Independence Day The British Library is holding a public lecture on the meanings of music in Brazilian culture by David H. Treece, Camoens Professor of Portuguese, King's College London. David Treece is author of the forthcoming book: Brazilian Jive - from Samba to Bossa and Rap (Reaktion). The lecture will explore key symbolic ideas attributed to Brazilian music and its role in shaping and characterizing popular images of the country.

Special thanks to Dr Janet Topp Fargion, Lead Curator, World and Traditional Music, who organized this for ARC. go to the British Library event link Overview of Brazilian holdings @ The British Library

September 7th. 8 pm. Brazilian Endowment for the Arts, 240 East 52d St, NY, NY. 212 371-1556. This flute and piano duo will present selected works from a Brazilian repertoire, reflecting the musicians's long-term partnership in music. Included are well-known important composers from the 19th and 20th centuries and also composers from the following generations. This panorama is intended to offer an opportunity to have a glance of Brazilian musical production for this instrumental combination.

The Duo Barrenechea, formed by Sergio e Lucia Barrenechea (flute and piano) will perform in a series of concerts in US to promote their Brazilian Music, including repertoire of their triple CD album "The Flute Music of Francisco Mignone." The concerts will be presented from September 5th to 16th, 2012. They will also present masterclasses and lectures.

To celebrate the BRAZILIAN MUSIC DAY event (in collaboration with the Archive of Contemporary music), host Béco Dranoff invited acclaimed American producer & DJ Maga Bo to be his first live guest on Sonoridade. Based in Rio since 1999, Maga Bo's original music project 'Comando Digital' and his exquisite remixes have been smashing the lines between roots and modern Brazilian music. A true pioneer of the electro/world music scene coming out of Argentina, Colombia Mexico, India, Senegal, Angola, South Africa, Kenya and all over, he is constantly travelling the world producing, DJ'ing and mixing everything he get his hands on. We were lucky to have him for a full hour to talk about the current Brazilian music scene, play some of the most forward thinking tracks of the recent crop and take a deep sonic voyage into the future sounds of Brazil. Dub, Chill, Dubstep, Funk Carioca, Roots, all genres dissolve in the world of Maga Bo. Happy Brazilian Music Day 2012!

September 7th. 9 - 11 pm. Beco Bar, 45 Richardson St., Brooklyn, NY, 11211 - 718 599-1645. Veronica (voice and cavaquinho) and Ricardo (guitar and voice) will offer an evening of classic sambas, from Cartola, Paulinho da Viola, Nelson Cavaquinho, Clara Nunes, Chico Buarque, Vinicius de Moraes and many others. Ms. Nunes is originally from Rio, in New York since 2005, who has had a regular Monday night gig at Cafe Wha? for the past three years, and played with the band Brazooka for 15. 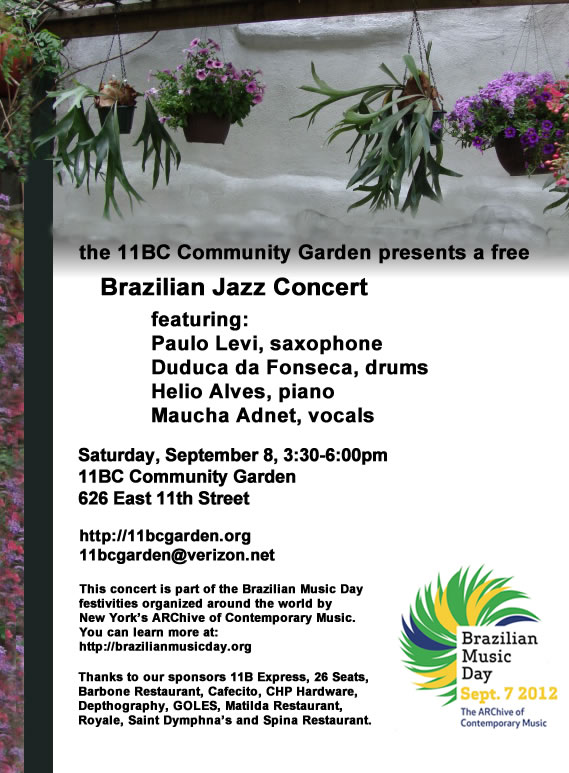 September 14th. 7:30 pm. Kulturschloss Wandsbek, Königsreihe 4, 22041 Hamburg, Germany. Rosa Morena Russa (Kateryna Ostrovska) is a singer-songwriter who grew up in Ukraine, but spent a part of her life in Rio de Janeiro - the result, "Russian samba" and Slavic "saudade." Together with her band she performs a show full of improvisation and musical deepness, mostly the songs of her debut album "Está ficando Russo" (DaCasa Records 2012). Rosa's music is completed by a great visual performance of a first-class Russian artist Pavel Ehrlich. His simultaneous painting is projected on stage and transforms every moment of the show in an exiting audiovisual feast of senses. go to site go to venue